One of my fraternity brothers pointed me to an article in the Wall Street Journal about a sculpture farm in New Zealand that appears to have a Chrinitoid. While very similar, the Alan Gibbs version is Variant "V" while the Chrinitoid is Variant "III". 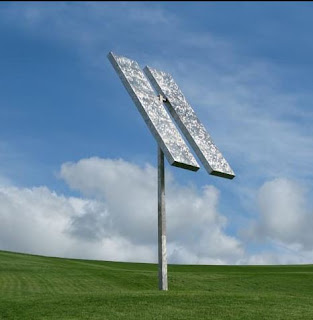 Still, I will need to add a return visit to NZ to my bucket list!

During Spring Break this year, my eldest son (10) mentioned that his art teacher was talking up a place called Storm King and that he would like to check it out. Since I was familiar with Storm King thanks to my many trips up the New York State Thruway...and knew there were Rickey pieces on display...I strongly supported the idea.

Not the best selfie...

I am calling it the Minitoid.

I love that I still get emails from people about the Chrinitoid! Here is a note that arrived this morning:


This is a screen capture from maps.google.com in the location you identified on your web page   http://www.paynecentral.com/tompayne/chrin/

I missed this sculpture so very much.  Thanks for doing the research!  I was on RPI campus from 79 to 84 or so.  I actually worked at a startup company (Raster Technologies) in Sage Lab Annex which is very near where the Crinitoid was displayed.  Was also involved with W2SZ and the Polemic 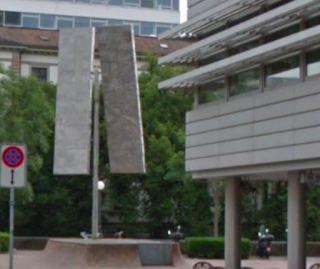 A recent email from Julia Gavin

Thank you for finding out what happened to that amazing sculpture. I was a student at Russell Sage in the late 70s & I would often go and watch it sail and listen to it creak...it was a very meditative experience, & one that I think of frequently, even now, so many years later.  I have done a few desultory web searches in the past, with no luck, so I appreciate your efforts.
Posted by Tom Payne at 7:26 PM No comments:

Hi Tom,
I read your 2004 article in the Rensselaer Alumni magazine and have perused your website on the subject. You said to snap a picture and send it your way if anyone was in the neighborhood.  Consider it done!

My observations:
It was good to see it again though!   Also, I was able to see a couple of pictures of it using Google street view.

Hi Tom. I am Vin Ree, BS Physics, RPI Class of 1985.  Yeah, it was sad that The Chrinitoid has disappeared and I am very happy to have discovered that you hunted it down and created your In Search of The Chrinitoid site.  I haven’t checked but maybe you should start a Facebook page for The Chrinitoid!

However, I think you need to update the current website since satellite image has changed and blocks The Chrinitoid.

I had to do some manipulating with Google Maps, but The Chrinitoid is located at:

However, below is a nice Google Street View of The Chrinitoid and another map.  You can go into Google Maps yourself and get a different and better angle in Street View, but I wanted to capture the canal in the picture.  I don’t think anyone would have a problem if you edited this pic and added it to your site.

Enjoy!  And, since it’ll be the 30th anniversary since The Chrinitoid was removed from campus, perhaps you should write an update article for the alumni magazine!

BTW, while I have no evidence (I think you’d have to check back issues of The Polytechnic), I strongly believe that I had read in the Poly that Rickey wanted RPI to buy The Chrinitoid for $75,000.  RPI balked, so Rickey took it off campus.  It’s a shame too – we lost both The Chrinitoid and George Low that summer.

Also, about that 26 SEP 1984 Polytechnic front page picture of The Chrinitoid on your website.  The photographer, Masaki Minato, was Class of 1986 Chemistry or Chem Eng.  I knew his older brother Kazuki who was Class of 85 Physics with me.  We were roommates our junior and senior years and Masaki would stop over all the time.  I am Facebook friends with Kazuki and a former girlfriend of his, Rachel Hefner ‘86, so if you need to get in touch with Masaki, I should be able to hook you up although he’s rather public on the web.  For all I know, he still has the original pic or negative that was used in that Poly photo.

Thanks again for all of your efforts!